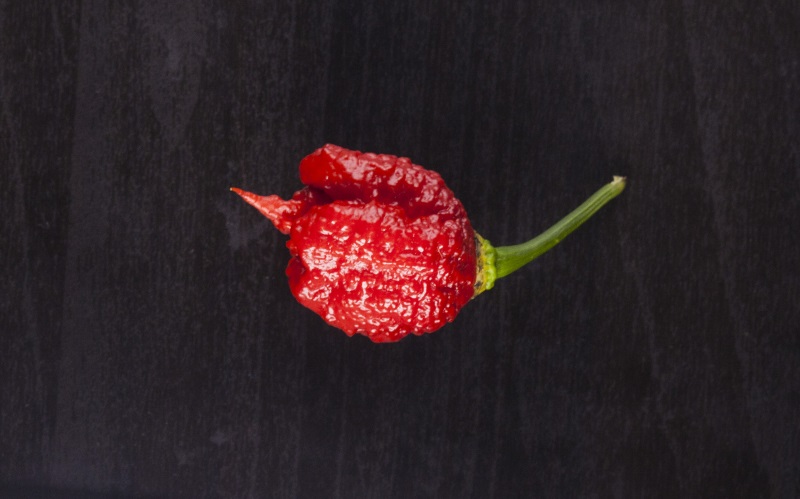 Has your diet been a little lacklustre recently? Dare we say, even bland? All the herbs and sauces in the world have been unable to sate that niggling desire for something… out of the ordinary.

Never fear, the Reaper is here!

The Carolina Reaper chilli to be exact. It is the hottest chilli ever grown, a sure-fire way (get it, fire… chilli…) to get your taste buds feeling rejuvenated in the post-Christmas slump. Not convinced? Well, consider this…

With a whopping 2.2 million on the Scoville scale, the Carolina Reaper is understandably the hottest chilli in the world. The unusual appearance of the chilli is the reason for its name. A gnarled, lumpy, skin is often accompanied with a tail like a scythe.

The chilli was bred initially in, plot twist, Carolina by Ed Currie, the owner of the PuckerButt Pepper Company. He achieved the amazing heat of this pepper because of the crossbreeding of a ghost pepper (a former world’s hottest chilli) and a red habanero pepper.

In 2013, the chilli was given the accolade of hottest in the world by the Guinness World Records. This is not a title that has been surpassed, nor does it seem likely to be anytime soon, as surely any chilli that is hotter than the Reaper would be uneatable!

There are several amazing facts that surround this particular pepper, some that will blow your mind (even before you try the heat of this pepper)! Fun facts such as:

Here’s a final fun fact: mammals are uniquely affected by the heat of chillies, birds don’t feel any heat at all when they eat a chilli! That doesn’t mean you should be feeding a reaper to your local pigeons, though!

These peppers certainly talk the talk, but do they walk the walk? Find out for yourself! Here at Farraday’s we have developed an amazingly tasty concoction from this pepper, our Weaper Reaper Chilli Sauce is not for the faint of heart! We suggest pairing this with something delicious such as steak, stir fry or even some scrambled eggs to absorb some of the heat.

Want to keep up to date with all of our amazing chilli experiments? Then follow us on Facebook and Twitter to keep up with all our latest updates, and make sure to get in touch if you would like to find out more about any of our delicious products.